Today is my first day in 4 years without a baby in a crib. This morning, in a spring cleaning frenzy manic state, I declared it the day to clean, pass along, and move out anything that was "baby". I went through the boy’s closet like a whirlwind making a huge pile of all shirts too small and wondering why they own nine pairs of jeans and every single pair has a hole in each knee. That's eighteen holes. We own more holes than jeans. I filled a box with toys- now all too young for my 3 and 4 year old boys and placed all outgrown shoes on top. I moved to my almost 2 year old daughter Elena (Elllie)’s  room and folded too small dresses, and held up pants trying to think if they could work as shorts. I folded up outgrown swimsuits, found a size one diaper, and placed all tiny blankies in a pile to give away. Then I turned and saw the crib against her pink wall. “It’s TIME!” I declared, suddenly and powerfully. “It needs to go! Big girl bed time!”  We had a beautiful twin bed and mattress waiting in the basement for this moment. I thought I would prep her about the transition for a few weeks, show her, do a trial run, etc. Instead I decided to plow forward. We were going to make this transition now. Today. Elena was completely ready, already asking to sleep in her brother’s big bed during naps. I’m in no hurry to move my last baby girl along outside of baby hood, but sometimes, it’s just time.  So I enlisted Husband Joe’s help to actually make the physical transition.

It is a pain to set up any furniture. It was almost impossible with three children hovering. “Move your hand, you’ll pinch your finger. Move your feet. Move your head. Seriously move your head. Daddy’s bringing in the mattress…. Well, I’m sure your head hurts. I told you to move your head…” “Wait, don’t jump yet, wait for it to stand up. Wait. Not on the box spring. Wait. Wait!!!” But the crib was finally out and the bed was set up and Elena Joey and Guy thoroughly broke it in with a jumping, bouncing, and pillow throwing celebration.

I set out to wash down the crib, trying to clean it.  On closer inspection it was quite a tired old crib. Three children and over four straight years of daily use of baby after baby after baby - and it looked exactly how I felt. Exhausted. I cleaned in between the rungs on the bottom and wipe dried puke or milk or something off. I noticed a screw was missing-probably breaking every single safety standard out there. I remembered clearly the day we bought the crib. Joey was 11 months old, and had grown out of his bassinet. I was five months pregnant with baby number 2, and we had grown out of the RV we had been traveling in. It was the most expensive purchase we had made for our kids. And apparently it was a good buy as it was in business for over 1500 days. I noticed Guy’s bite marks lining the top railing proof from when he went through his furniture eating phase. I cleaned and wondered what on earth I was going to do with this old crib. I thought it was illegal to sell it, and unreasonable to expect anyone to take it. It was irrational to save it, and very un-green to chuck it. So I did with it what I do with everything that I am undecided on. I carefully cleaned it, wrapped it, labeled it and placed it in the basement.

We probably have a hundred pictures of first born Joey in that crib. Sleeping and standing, singing and sitting. I snapped away in awe of how baby he was. By the time sweet Ellie got her turn in the crib three years later, I never took one picture. Open the door to a sleeping baby’s room?!!? And chance a wake up?!  For a picture?! No baby was that cute. Instead of lots of pictures, I remember lots of nights putting her to sleep, carefully tucking her in, Guy always wanting to be part of the process as he held her hand through the railings as we said her goodnight prayers. But today, she is no longer a little baby and Ellie was so excited about her new bed and alternated between high pitched joyful squealing and laughter while stomping on her new pillow.  If I had any thoughts that I was rushing her, her reaction proved me wrong. And I watched her stomp and dance and I realized that I could leave her crib set up for fifteen more years, but she would never be a baby again. Then she immediately tumbled off the bed headfirst, and brushed herself off and laughed with delight.

Today, after I finished cleaning the old crib and organizing the new room, I paused in the doorway and stared at my daughter’s bed trying to decide how I felt. Happy? Sad?  Perhaps neither... Maybe both. A moment passed before I realized  with clarity that I was actually feeling hungry. So Joey, Guy, Ellie and I all sat down to a peanut butter and jelly lunch. Where we ate goldfish and talked about plans for tomorrow. Then, I laid Ellie down for her first real nap in her big girl bed. And after two re-tucks, one doll getting, five warnings, one stern look and forty five minutes later, I peeked in on her. And she was softly, gently breathing. Quiet in her big girl bed. Sleeping like a baby. 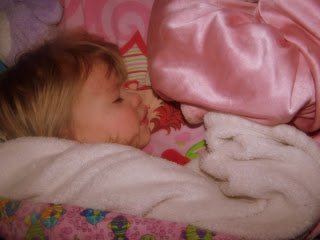 Look!  A sleeping picture! 1st one in her new bed!

Posted by Kate No comments: