Our dream for a house is as old as our toaster.
And that’s not a weird metaphor or anything. Seriously. An actual toaster. We have been dreaming of buying our own home since we have owned this toaster. A long time.

Right after Joe and I lived in the traveling RV, we lived in a house that we shared with three other people, and then we moved into our little apartment three years ago. It was little, but just us, and we loved it. Mostly because it was the start of our family’s ‘place’. And because it had enough room to store more than two bowls and two forks (which were basically all we had space for in the RV). We moved in and received a toaster as a present. I was so excited. I had two children but I was now on my way to adulthood because I had received a toaster. We threw out the wrapping and the box and two days later the door on this toaster broke. Like ‘unfixable’ broke. Oh but we tried to fix it. First I cried. Then I ran to check the garbage for the receipt. And then we did the only reasonable thing - propped the door close with a pencil balancing on the counter so it still worked. And it worked just fine. I thought briefly about buying a new toaster but also thought to myself  “no, we will move soon, we will buy a new one then.” A toaster is a huge deal. We use it every single day. But I kept thinking that I would buy one, another time. Soon. Like when we moved. The apartment was only temporary.

The pencil technique lasted a year, well into Joe’s start- up-year for his new company. The pencil dropped behind the refrigerator about the time I became pregnant with Elena. We used a stainless steel coffee mug instead. And that has remained for over another year. A year spent outgrowing the apartment and needing more space. We have had both my parents on different occasion offer to buy us a new toaster. Friends have commented. Joe and I have both gotten super aggravated because it takes about ten minutes to brown a piece of bread. The boys became patient breakfast eaters. But every time I was going to buy a new one I thought about our new house. Because we knew it was coming and I’d buy one then. But first came a third baby, and long hours of work. And saving and saving and saving. And then came a shortsale house that we thought for sure we would buy as our own- but that fell into foreclosure and went back to the bank. We waited on a different shortsale, for a whole long winter. And waited, waited. Then now, a perfect house, an accepted offer, a passed inspection. And a delayed closing date, and another delayed closing date. And another delayed closing date.

Except here’s the thing- I want to write it in size 6 font so you know it’s a whisper. Whispering is safer until the event actually happens. We are closing on our new house on Monday. We are closing the deal on a house that we love. A house of our own that is here just for us. A house of our own -on our own plot of land -with a playroom and bedrooms and space for a  garden to garden and a fireplace for fire and a kitchen to cook and a counter for a toaster. A toaster that will toast in under ten minutes.

I will put a brand new toaster on that counter. And I will remember our little apartment and the house with the people and the rv with the wheels and beginning of our family. I will say grace before breakfast. A breakfast of coffee and bread and a prayer of thanksgiving. For sweet beginnings made from long waitings. For a house-home of our own. For this time. And this toast. 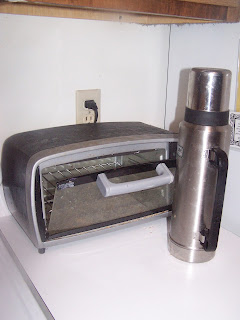 betcha you were hoping for a pic of the house! Nope! just a toaster. : )
Posted by Kate