Well. In case you’re wondering and waiting with bated breath- the bird phase has eased slightly. I’m leaning towards trying to drag it back however, because a much more terrifying interest has taken hold of my boys. “Climbing.”
I think (no. I know) when this started. Husband Joe left a few weeks back to go on a backpacking trip to climb mountains in Colorado. As camping equipment lay strewn all over the living room, Joey and Guy sat mesmerized as Joe packed his bag. They asked him what he was going to do and he told them, “go climb mountains.” Climbing anything has always interested my boys, especially Guy, but this turn of phrase just captured Joey.  And since then, my toddlers have been practicing to ‘climb mountains.’ Joey and Guy repeatedly climb on the back of the couch. What are you doing?! I ask. “climbing mountains.” Guy says. I tell him to get off the couch. “It’s okay. We’ll be careful” is the typical reply from either child. Oh. Okay. It’s okay that you’re practicing climbing mountains on my furniture because you’ll be careful. Oh. No big deal then. As you jump off into the wall. Totally no big deal.
Husband Joe came home with pictures of his trip and the boys were fascinated by the clouds near the summits. We were at the park a few days ago and halfway up a climbing wall Guy blocked the flow of traffic to turn around and tell the other kids that his dad climbs “way high into the clouds.” He kept repeating this phrase until a preschool girl almost knocked him down as she tried to scoot past him to the landing.
On the promise of “one day, soon, when you’re bigger and have practiced, you can come climb mountains,” three year old Joey wants to ‘practice’ all the time. Mostly playgrounds. Thank goodness. But this Saturday it was raining. And we have three children. And live in a super tiny home. So of course we did the most reasonable thing. Take apart Joey’s bed to make a fort with the mattress. Which of course ended up as a climbing wall. You know. So my two and three year old can practice climbing mountains.  So they can climb way high into the clouds. I’d prefer if the mountains they may climb are always mattresses, but I'll stash that wish in the same place as 'hoping they never want to drive'.  As long as they’re with their dad (and make sure they won't fall on Ellie) it’s just fine with me. Climb away. 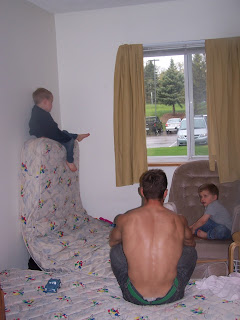 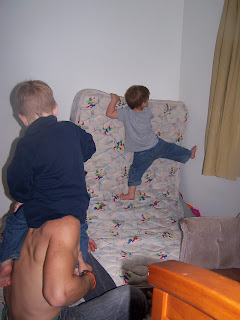 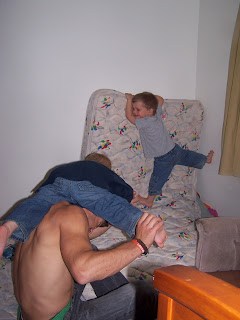 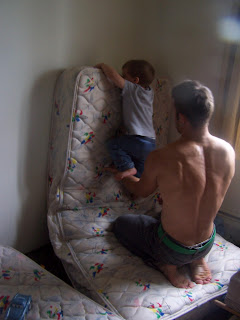 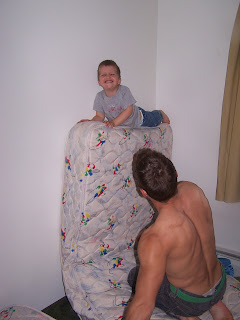 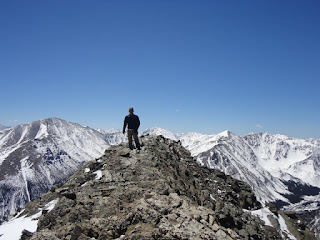 Another Summit!!
Posted by Kate