So today we were walking in the parking garage. I was holding the baby and the bags and Joey and Guy were holding hands. Supposed to be holding hands. I was walking a few steps ahead of them and heard some scuffle happen between the two of them. (Something very traumatic I’m sure… Like Guy was holding onto Joey’s sleeve not his hand) And to demonstrate his unwillingness to participate in this gesture any longer Guy did the unthinkable.
He intentionally laid down on the parking garage floor on his stomach. To show the 'injustice' that he felt was upon him he literally rubbed his face back and forth on the ground while doing a “snow angel” motion with his arms. No screaming. No yelling. Just the greatest thing he could think of to get attention.
With my arms full of baby and bags I yelled at him to stand up.  That that was so gross. Get up! (I was also gagging.) I also think I stamped my foot. He started to obey and then-I watched as pure curiosity over took him and he did the other unthinkable. HE LICKED THE FLOOR. I’ll say it again for full effect. HE LICKED THE FLOOR OF THE PARKING GARAGE WITH HIS TONGUE!!!! And then he casually stood up and reached for his brother’s hand.
So I’m standing there. Arms full of baby and bags and gagging and yelling, and he does this grossest thing ever. But he is now standing. He is now holding Joey’s hand again. They both look at me… Joey with big wide open eyes, Guy’s eyes darting up then down. So then I did the unthinkable.
Fully caught off guard, and at a loss for a suitable reaction, I just turned around and said, “Come on boys! Let’s go!” and completely ignored it. I mean, licking the floor wasn’t really wrong. It was just disgusting.
In hindsight I probably could have handled that better. I could have said something like, “DON”T LICK THE FLOOR EVER AGAIN!!” In a really loud voice. But you know, I don’t think he will.  He was now walking and holding hands, dirty but alive, and it was lunchtime. 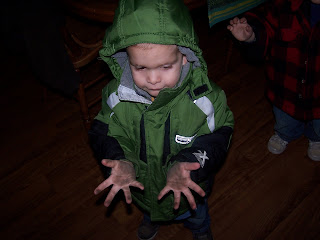