Today is the Saturday before Easter.  In the Christian calendar that we follow there is the season of Lent, which begins with Ash Wednesday and ends with Holy Week: Palm Sunday, Maundy Thursday, Good Friday, and then Saturday, and then Easter.  I call this the Waiting Saturday. Today we sit in weather that is neither snow nor rain, we hunt for eggs in a field (eggs that are not real but certainly candy delicious), we prepare for tomorrow’s Easter dinner, and search our house high and low for Easter clothes. How do little boys manage to lose dress shoes so easily?


Last night we remembered the tomb of Jesus being sealed. The crush of death and the sadness that separation brings. As a church, we remember the pain of Jesus, the despair of the disciples and the end. It seemed like the end. Tomorrow we remember the Resurrection. We celebrate the conquering of Life over death. Of Good over evil. The impossible. Sins being forgiven. Light shining. Light winning. Jesus said it was finished and he rose. He has conquered death.
And yet today is Saturday, and it still feels as though everything is dying.


This year we have seen hundreds of children. Hundreds of children, who have suffered unimaginable pain. Abuse. Abandonment. Desertion. There are millions more unseen. This year we have fought with corrupt governments and begged for change. We came home to corrupt government and sick news stories and murders which go unnoticed.  Smaller stabs with our own tongues that leave others to bleed. This year I have snuggled so many children conceived of a teenage mother and the mother’s father.  This year I have faced the mirror and dug deep into my own muck carried in my spirit. This world is sad and broken. Every good thing seems small. Certainly not miracle big like a resurrection.
I have realized that being a Christian in this world means not jumping to the Resurrection before standing still in the waiting. So maybe we as a church need to practice the waiting. Before the jubilee of Easter, there was the end of the world.  Do we let ourselves feel the end of the world? Can we feel these moments and keep a quiet hope of a resurrection?


I sat with a woman in late autumn who was losing her child. A miscarriage. And as life left her body she shook and sobbed. Her voice echoed.  I just want my baby, I just want my baby. Her tears were thousands of years old. Everything gentle in nature grieved with her, and it became winter. We waited.
One marriage died slowly and unnoticed until frantic CPR was needed. There was pounding on the chest and promises and there is no telling if it will make it. We watch and wait.


She gave me presents last year, but this year she was not at the orphanage. She jumped the wall. Ran away. Her black hair probably flying behind her as she ran for her life. Or away from it.  I thought maybe she might be found. I waited.
This year has felt like a very long Saturday.


We have spent this year waiting for a little boy to become our own. He is our son in our hearts and we are waiting for Honduran and American governments to agree that he can be our son on official, stamped paperwork. I spent a Tuesday evening with him as I had spent many evenings before at the Toddler House. I bathed him and helped him over the tile floor so he wouldn’t slip. I wrapped him in towel and put him in jammies. I sang his song and kissed his face and said goodnight. I left to walk home. Moments later I heard him sobbing and crying Mama Mama.  I saw his little fingers under the door and knew that his face was pressed against the concrete floor as he called after me. His voice was so raw that I turned before I meant to and ran to him. My heart raced and I was flushed with primal instinct. I grabbed him, held him tight in my arms and said his name, Jesύs, Jesύs! I told him in Spanish, Mama is here! I am your mother! I will always come back. Mamas always come back. Forever. I will always come back. His runny nose leaked on my shirt and his wet eyes were hot against my neck. His breathing was ragged and I made the promise he had no reason to believe. I am your mother. I will come back for you. I promise. Always. I am your mama. His sobs subsided and I felt another presence in the empty room.
A young boy Noe (No-way), was standing silently by the bunk beds. His jammies were blue. His eyes were wide. He had heard everything I said. His young mother lived with him for three years here. Last autumn she ran away without him. She has not returned. He lives with her absence as a shadow.


I stood there and held a boy in my arms and begged him to believe me. I reached the other boy’s shoulder and promised I saw him. We let the pain wash over us. The ache was crushing. The air felt like death. We held on and grieved all that was not. We ached and we cried and we waited.
The world whispered that this was an end. I felt that surely death and darkness wins.
Yet.
This story has already been told. And in the end Life is stronger than death. The way of Jesus’ love is greater than the sin of the world. I have seen lives turned around and people healed and yawning babies. Laughing children. Beautiful sunrises and sunsets. Enough water for all in line.


As this season of Lent ends, I am reminded: Wait. Reach. Get up and go to the tomb.  Go where you think death has won and look.
There will be a most surprising miracle. And if there isn’t- go again tomorrow. 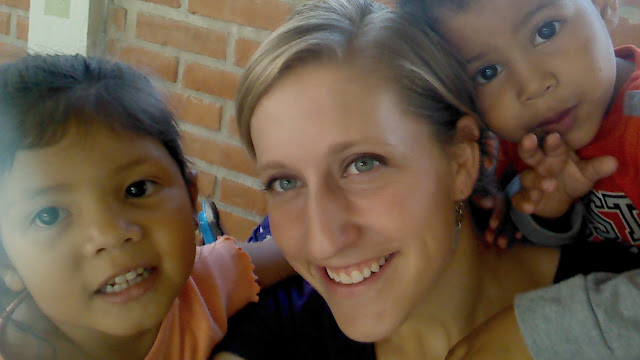